Enjoyed this enormously last night. If you can stomach the idea of theatre on a Monday night, there were plenty of the good seats available and a hefty discount should be possible (I certainly had one). 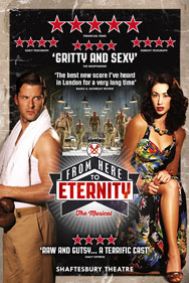 This is South Pacific on steroids. Who’d’ve thought that such an old tale could be made to seem so fresh. The male chorus is wonderful: the song and dance man is alive and well and performing nightly in well cut fatigues at the Shaftesbury. The story has bite. The songs, whilst not particularly memorable, are well-staged and excellently sung. (The band occasionally overwhelmed the singers – but that’s a minor quibble). The set was fantastic. As were the ideas employed to bring in extra locations. The FX are … to die for (you’ll see what I mean if you go).

Darius Campbell was mature and thoughtful as Sergeant Milt Warden. Robert Lonsdale, as Robert E Pruett, did a marvellous job of showing us a man tortured by demons largely of his own conjuring. There was brief, deliciously anticipated and very classy nudity by Rebecca Thornhill as Karen Holmes.

However, for me, good as the others were, Ryan Sampson of ‘Plebs’ and ‘Fresh Meat’ stole the show. And also started it. He has the look of a young Robert Downey Jnr. in this show, rather than the pudding basin wig and dumbface he uses to excellent effect in Plebs.

One thought on “From Here to Eternity: the musical”