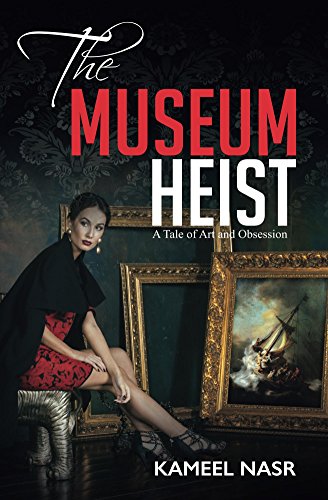 Description:  The crime at the bottom of this mystery actually took place. The Isabella Stewart Gardner Museum in Boston exists and works of art, including the paintings the book speaks of, were stolen from it in the small hours the day after St. Patrick’s Day, 1990. There art and life diverge: the real stolen paintings have never been recovered.

The fiction is partly a ‘what if’ about what might have happened to the art and how it might have been retrieved. But it is also about the sort of odd-ball who might have found the missing art.

The blurb claims the book “is a fast-paced, wily whodunit filled with intrigue, romance and stimulating scholarship,” which sounds pretty accurate to me. The blurb continues: “Author, Kameel Nasr, an international adventurer and art connoisseur, shines a penetrating light on the motives, habits, and sometimes less-than-noble intentions in the demi-monde of world-class art collecting. Along the way, he’s created a wonderfully satisfying mystery novel for anyone interested in historical fiction. The Museum Heist takes you on a roller-coaster ride of suspense, a meticulous portrait of the underbelly of the art world at its highest echelons.

Author: Kameel Nasr was born in Lebanon and emigrated to the USA as a child – since when he has turned his hand to very many spiritual, physical and creative pursuits. He describes himself as “an ebullient and upbeat New England writer, adventure cyclist, dancer, spiritual seeker, amateur astronomer, social activist, and patron of art and music. Over the past 25 years he has produced books and articles on cycling, international politics, early Christianity, and a Boston Cozy Mystery Series [of which this book is part]. His works have been published in several formats and languages and been cited in numerous articles and journals.”

See more about Nasr at his website, here: https://www.kameelnasr.com/about/

Appraisal: this book is the first ‘Lieutenant Lowell mystery’, published in August 2015. (A second book in the series – The Symphony Heist: A Tale of Music and Desire has been published recently.)

Nasr riffs delightfully on the real news-story (the theft from the Isabella Stewart Gardner Museum in Boston), producing a fantasy of increasing complexity. He mingles investigations into art fraud, forgeries and art thefts with rich information about artworks, known and lost, of the Classical world.

Although this is supposed to be Lieutenant Lowell’s mystery, Nasr’s main protagonist is one ‘Paris’, who lives his life according to Pythagorean principles, following the philosophical tenets of the Greek Classical world, their heroes and heroines, and their pantheon of gods. This develops, inter alia, into an interesting debate about pantheism and monotheism, which led me to ponder on the differences between the rational and the animal mind.

You may throw up your hands at this point and say that all this sounds like heavy going, but the way Nasr treats his subject matter you can begin the book knowing nothing about any of the above, romp along enjoying the story and emerge at the other end knowing considerably more about high art (its collections, forgeries and thefts) and Pythagoras’s Classical Greek world than you ever thought you would – having acquired the information as painlessly as you might consume Greek yoghurt.

So this is a book that is more than a crime novel, and certainly more than the ‘cozy mystery’ that Nasr claims it to be. It is a fascinating and sophisticated puzzle. If you enjoy historical fiction, and/or have a working knowledge of some of the better known Greek stories, e.g. Odysseus’s journey home to Penelope, Orpheus and Eurydice, Helen of Troy and Paris, this will certainly help you to get the most out of the analogies drawn between those tales and the goings-on in this modern heist novel. But lack of that knowledge is no barrier to enjoying the book.

And it has more to say about the human heart and that organ’s motivation than your average crime novel would be interested in.

Oh yes – Lieutenant Lowell does have a considerable role in the book. And his own foibles too. His ‘gut’ is as prominent in the investigation as that of Leroy Jethro Gibbs, if for rather different reasons.

This book is unusual in its subject matter; a bit like Paul Adam’s books about long-lost, priceless violins, but without the murders. If that is your sort of thing, then hie thee to the Classical world without more ado. Here is a link to it on AmazonUK. If that is not your local Amazon you’ll be redirected, I think.

FYI: The book is written in the present tense. This gives a sense of urgency to events and for some reason which I can’t quite put my finger on, imparts a pleasing ingenuousness to the character of ‘Paris’. However, it is a tense which can get wearing over the course of a novel-length read. Fortunately, this is not a long book. Of course, from time to time the author needs to look ahead or behind and, in the file I was working on, such time shifts were not secure which meant the reader had to spend a few minutes working out ‘when’ she was rather than getting on with enjoying the story.

Format/Typo Issues: there were rather many of these in the file I was working from. A scan through an Amazon sample indicates that at least some of these (particularly the more irritating, running oddities) have been fixed. Why would an author seeking positive words about his published opus send a file full of errors to a reviewer? Why indeed.

The infelicities above had to lose the book a star.