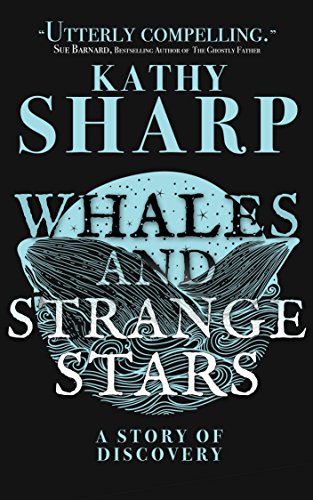 Kathy Sharp is a novelist well known for her three charming fantasy books set on an historical, fictionalised Isle of Portland: the Larus trilogy.

This, her latest novel, is also set in a simpler time than our own – but in a quite different place (although in it, too, water plays an important part).

Whales and Strange Stars begins with the quiet elegance of an otter slipping into the water. The story quickly gains breadth and depth and momentum as it swims downstream, urged on by deliciousness such as this ‘an empty gape draped in drab’ and this ‘The infant New Year lumbered forward unsteadily, burdened with ice and nearly knocked off its feet by strong winds’.

The book’s time is the eighteenth century and, as an historical novel, is unusual in that it does not deal with specific historical events, except for a passing reference to the king raising taxes to fight his war in America. What it does is tell a story of the time before the railways came and changed communications forever.

The book’s place is East Kent, as the author explains in an Afterword. If you are familiar with that part of the world you will enjoy picking out the real locations and geographical features which have been fictionalised for the book (and checking them at the end, when all is revealed). The author writes of the area with a deep affection and intimate knowledge, lightly worn. Exquisite thumbnail sketches of the river, the marshes, the winter weather, the big skies, the very contents of the hedgerows, set the scenes of the book.

The story concerns hard lives and making do. When money is scarce what may a man try to cushion his family from hardship? Personal possessions are so few, is it wrong to covet a fine knife or pretty ribbons?

It also concerns love – of uncles and niece each for other, of a man for his boat, occasionally of a man for his liquor. But it also concerns greed. How powerful men may ensnare others to their will, how having a little more makes a man want a lot, and how this can make him seem quite mad to his loved ones. There is treachery in the story too, as well as coercion.

And, finally, it is about growing up in a slow, circumscribed universe. How a girl on the cusp of womanhood, living in a backwater, full of fancies and commonsense both, must puzzle out the behaviour of the adults in her world for herself. Men and women alike are too busy working to explain. There is a book on manners, and there is the back of my hand, and between these two extremes one must puzzle out what actions and words may mean and what that may signify for one’s life to come.

It is also a salutary lesson against eavesdropping.