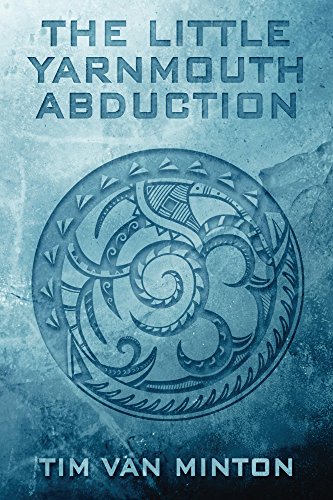 Description: the story is set in the far north of Scotland after climate change has melted the great ice sheets. Little Yarnmouth inhabitants have disappeared because of nefarious plans laid by powerful persons living in Middle Langton, across the bay. The kidnapping is performed by members of tribes roving further south than hitherto because of the thaw. The protagonists are two teenagers, Evan and Nira. They are helped by a middle-aged eccentric who lives very comfortably in the sewers beneath Middle Langton; his regular companions are Corporal Punishment and a very large rat.

Author: Tim Van Minton ‘loves cold places and warm people’. Thereafter, different sources give different information. At the end of the book he says he lives in a boat on the north coast of Scotland with two dogs, finishing his next novel; on Goodreads he says he lives mostly in New York with his wife, son and cat. Van Minton plans a trilogy of which The Little Yarnmouth Abduction is the first book. Meanwhile he has written and published St Georges P.R.S. which is another YA book, with leanings towards the paranormal.

Appraisal: When I was a teenager (back when gin was tuppence a tot) there were no books aimed at teenagers. Once one had consumed the contents of the children’s shelves at the library it was on to Mills & Boon and Zane Grey. This may explain why I enjoy the genre now. And what a rich genre it is for writers!

The book’s premise is intriguing. How will people living near what used to be ice sheets fare when those ice sheets are gone? It makes a nice change from witches, wizards, vampires, werewolves and other urban fantasy tropes.

It is when dealing with boats that the story is strongest; be it a dinghy with an outboard, a power launch, a dilapidated coaster, a tug, a mistreated hover craft or a well-maintained patrol vessel, each vessel is lovingly created and completely credible and pertinent to the story. Van Minton loves his boats. As do I. Everyone in the story has recourse to boats as their primary means of transport. The constant threat to water travel from ice bergs is nicely drawn. There are a few references to how the lost ice impacts the world in other ways.

The plot proceeds briskly. Occasionally elements of it feel a bit as if they have been randomly generated. There is a mushroom fight which is an original idea, but stretches credulity. From time to time the suspension of disbelief is difficult to maintain; for example, at one point three people hide behind adjacent, floor-length curtains and are not discovered.

I wondered, almost from the outset (and before I checked) whether the author was American, rather than Scottish – and so it proved. I didn’t get a feel of Scottishness from the story (despite attempts at dialect): rather a sensation of the Pacific Northwest in the USA. Tribes emerging out of the disappearing pack ice, with strangely Native American names such as Conkwoyoto, might have been more believable in that location.

FYI: When the great ice sheets melt, oceans will rise. Substantially. The book does not deal with that at all. I wondered, as I read it, how come the rise in sea level had made no difference to the island on which Yarnmouth and Middle Langton stand: how had it not flooded the sewers, submerged the quays, driven the population to live on the hills? What about the Faroe Islands (which figure in the story): would they not be drowned? Positing little or no rise in sea levels as the Earth warms up flies in the face of current credible scholarship and feels misleading to me.

Format/Typo Issues:  the book would benefit from a thorough edit. Punctuation and spelling aren’t as reliable as they should be. The odd authorial idiosyncrasy  becomes trying. For example, characters ‘cry’ things to each other frequently, often when they have just been shushing each other because people wishing them harm are in close proximity.