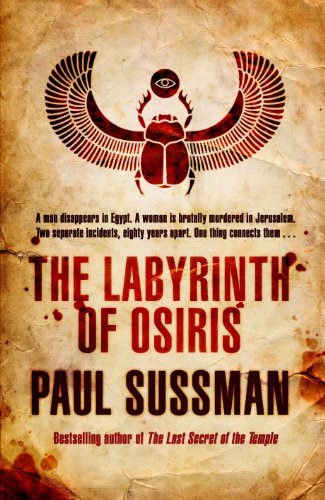 This is a tremendous read. It is a whopping 744 pages long and after that there is a useful 20 page glossary. (Had I known it was there I might have referred to it during my reading of the book. It is not essential, but it is interesting.)

If you have an interest in Egyptology, and the modern Middle East (specifically Egypt and Israel) then this book was written for you. If you enjoy Dan Brown’s books but have no specific interest in the Middle East I believe you will still enjoy the ride.

Sussman’s grasp of the three Abrahamic religions in Jerusalem and Luxor, and elsewhere in Egypt and Israel, and their factions (Copts and Druze to name but two) is both wise and deep. Using that understanding, and his professional expertise in archaeology, he has woven this vast, labyrinthine book. His plotting is assured, his characters varied and complex. He leads the reader through his 744 pages without one ever losing one’s place in the scheme of things.

As the plot blossoms connections are made which span decades, then centuries. Eventually, what looked at first like a single murder in the Armenian Quarter of Jerusalem has grown to include a slew of bodies and an international conspiracy. The two main protagonists – Jewish policeman Alieh Ben-Roi and Egyptian policeman Yusuf Khalifa – have private lives filled with trouble. Indeed, trouble is everywhere: wells are poisoned, people get lost in life-threatening terrain. Politically, trouble is never far away either. Nevertheless, the Muslim and the Jew work well together, as they did in an earlier book by Sussman (which you don’t need to have read in order to enjoy this).

Sussman sets the book in 2012, the year he sadly died. Although 2012 is now six years in the past, and Middle Eastern politics are as fluid as water, many of the antagonisms in the region are as old as Abraham. I felt I had learned something about the ways of the Middle East from the reading of this book. I also learned plenty about Ancient Egypt (long an interest of mine). But the main grist of the book is a fascinating thriller.

Sussman only wrote four novels (plus one finished by other hands and published posthumously). His death (of an aneurysm at the age of 45) is a loss to the ‘history and mystery’ genre. This is work of superior quality. I read a lot in the genre and I have not come across a book as well written or plotted as this before.