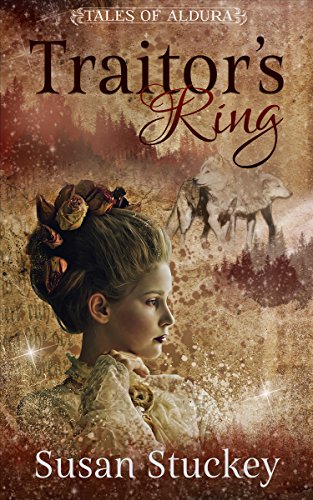 Description: Lady Kari Farley has been widowed in the war with the Halurdow and faces a bleak, penniless future. In the nick of time her former lover offers her a future of riches and independence in return for helping enemy invaders identify and capture a Guardian of her own people — someone who wields the magic of the Twin Gods. Convincing herself that a peaceful capture with her help is the best that can be hoped for, and looking forward to a life of ease and plenty, Kari accepts. But can the Halurdow and her old lover be trusted?

Author: Susan Stuckey says of herself (on Facebook) “[I am a] wife, mother, sister, daughter, caretaker of multiple dogs, cats and ferrets … sometimes writer always a reader. One of these days I will advance into the modern age and convert some of my pictures to digital and have a real “me” for an avatar.” In the meantime her online avatar is a delightful shaggy dog with a quizzical expression.

Appraisal: Traitor’s Ring, published in July 2018, is around the 20th book in Ms Stuckey’s ‘Aldura’ series, others of which have been reviewed here.

Don’t worry if you haven’t read any of the others. Neither have I. The book stands alone well. And if you often pass on fantasy novels because the saga seems to go on forever, be reassured that this adventure is completed in a modest 142 pages.

When we first meet Lady Kari Farley there is a lot of ‘woe is me’ about her. She has been brought up to believe that wealth and position are the only important things in life and has lost both, so she’s in a pretty grumpy place and is hard to warm to. However, as soon as she sets out on her mission to Furster’s Farm she begins to question her life to date and develop as a person. Stuckey keeps the focus on Kari’s mission and the story quickly picks up pace. (I read the final 40% of the book in one go.) The Halurdow invaders are satisfyingly sinister: the invaded Kalieri are much more fey, with a pleasing line in wolf protectors. Jeopardy is plentiful. The ending is satisfying, yet leaves room for a further adventure to take off. If you enjoy this book, there are a further 19 set in the same world to entertain you.

** This review was originally prepared for Big Al & Pals, for which I received a complimentary file copy of the book. **