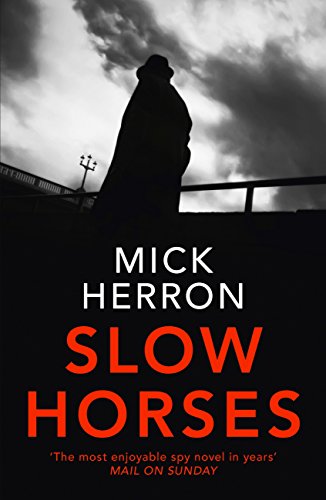 I’ve been meaning to get around to this novel for the longest time. My brother recommended it to me. We are both John Le Carré and Gavin Lyall fans. Since 2015, when this first Jackson Lamb spy thriller came out, Herron has written another five. So that’s now a nice juicy series of six to enjoy.

But back to Herron: he does complexity well and he employs plenty of humour. His point of view is as some kind of insouciant omniscient devil who just wants to watch the world burn: nice.

Slough House (which morphs into the title of this first instalment: Slow Horse(s)) is where they send spies who have seriously stuffed up, but who they don’t want to (or can’t) sack, pay severance to, or have an unfair dismissal hearing for; or who have been stabbed in the back by colleagues. So some of those mouldering in Slough House doing mind-numbing busy work deserve to be there and some do not. It is an interesting part of the game in this first book to try and work out who deserves to be there and who doesn’t.

Slough House is under the surly leadership of Jackson Lamb, who used to be one of the best in the business. He is still a damned good spook. And one of the most convincing slobs I have ever come across in fiction. What can he have done to get stuck in Slough House? Could it be something to do with personal hygiene? It is not revealed in this book. I suspect he is one of those stabbed in the back – although possibly for good reason. The six books together are known as ‘the Jackson Lamb series’ so Lamb is the protagonist who carries the novels. That kind of weight is not really in evidence in this first one. Presumably his substantial and brooding presence is felt more later in the series.

This book sets up the characters of the Slow Horses at length. Another reviewer describes the book as a slow burner and because of all the scene- and character-setting I think this is right. You’ll have to wait until I’ve gotten around to book #2 to see if that continues or whether we plunge straight into plot next time. I have my fingers firmly crossed for less exposition and more turny-twisty plotting. Because the turny-twisty plotting, when it arrives, is very good indeed. The thing that makes this less than a 5* book for me is that most of the good turny-twisty plotting (and the presence of Jackson Lamb) comes in the final quarter of the novel.