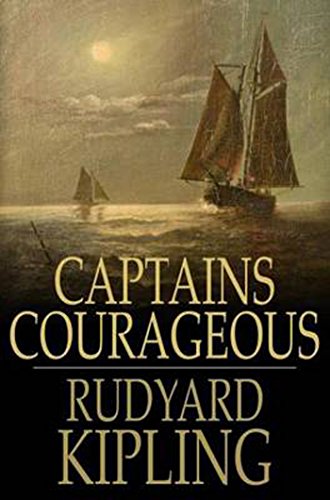 I am unreasonably fond of Kipling. I only got round to his Kim as an adult and was blown away by it. Since then I have been working through his oeuvre when I get time. I believed this to be a book about army life in India when I picked it out. It was certainly cheap enough on Kindle (free, in fact). But it just goes to show what broad interests Kipling had: the courageous captains turn out to be, not military, but a) schooner captains on the Grand Banks of Newfoundland and b) a captain of American industry.

Two worlds collide (as they say) when a privileged youngster is washed overboard from the fancy cruise liner on which he is crossing the Atlantic. The reason he tumbles over the rail is because the liner has to alter course to avoid running down a flotilla of small fishing schooners. The lad, Harvey, is picked up by one of them. Their captain shows no interest in returning Harvey to shore, but instead puts him to work.

What follows I found to be riveting. Harvey learns how to fish from a dory, clean fish, steer, keep the boat tidy and in good fettle, and how to ‘hook’ fried pies. He develops a deep respect for and camaraderie with the captain, his son, and the other crew members.

The fishing trip lasts weeks. But eventually the hold is full and the schooner returns to Gloucester, Massachusetts to offload. When it does, Harvey sends a telegraph to his parents, who are now living on the Pacific coast. Harvey senior, that captain of industry, readies his private rail car, calls ahead to make all the connections, and crosses the continent in … no, I won’t give you the hours and minutes, it would be too much of a spoiler (although Kipling does – he obviously knew his railway racers).

I love anything to do with the sea, so that aspect of it enthralled me. The action is relentless, the characters are beautifully drawn, the pages turn themselves. My heart was still on the Grand Banks when the schooner docked at Gloucester, so I found it a little difficult to raise enthusiasm for the railcar racing from coast to coast across the USA until I realised that this was part of Kipling’s magic, and that Harvey junior was ambivalent about rejoining his old, privileged, world too.

Kipling wrote this book – the only one he set entirely in America – in 1896, so it is almost like reading a rollicking history of the time. It is maybe set a few years earlier than that, as motor cars don’t seem to have made an appearance yet.

Teddy Roosevelt wrote of the book that it described “in the liveliest way just what a boy should be and do.”

If you like historical derring-do, you will enjoy this.

I have included, above, the cover of a very inexpensive, Kindle, edition of the book simply because it is illustrated. I think the edition I read has now been withdrawn. Illustrations, like poetry, usually work less than well on a Kindle – but you might go for the paperback, in which case they will be big enough to enjoy and in the right place 🙂

One thought on “Review: ‘Captains Courageous’ by Rudyard Kipling”