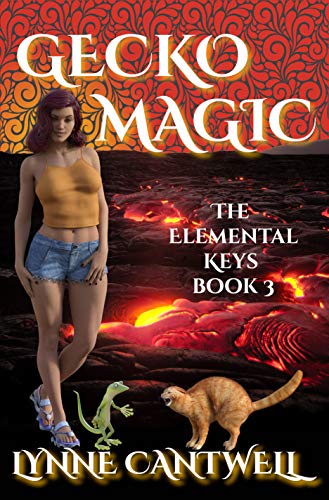 Description: some spoilers are inevitable here if you haven’t read the first two books in this series. Four demi-elementals (half human) have been brought together by The Powers That Be to foil a demon named Surgat – which translates as One Who Opens All Locks – who is determined to collect four Elemental Keys which will open a mysterious door. So far Surgat has foiled them twice. Now they are journeying to Hawaii to attempt to get to the fire key before Surgat does.

Author: Lynne Cantwell is a prolific author of short books in a number of different fictional genres, from romantic to memoir. Apart from the memoir, all the books have an element of what Cantwell calls ‘the woo-woo’, ie a sixth sense in her protagonists, and an edge of otherworldliness which manifests as creatures and gods out of myth and legend.

She is also a stalwart of Indies Unlimited, where she contributes sensible advice for writers.

Appraisal: Hot on the heels of the previous instalment, when the demi-elemental quartet were in Ireland looking for the Earth key, comes this (literally) hotter instalment which has them scampering between volcanoes on Hawaii. As the story unfolds their relationships deepen and we learn more about what makes Rufus and Gail, in particular, tick. Raney and Collum’s more intimate relationship is a joyful one, which almost makes this old cynic believe in love again. Rufus turns out to have a quite delightful Auntie on Hawaii and a cousin-by-marriage called Annie. These two help the four Key hunters in all sorts of ways, and the reader gets a sense of Hawaiian life through them. As I love to learn about new places (and am unlikely ever to get to Hawaii) I enjoy this sort of local colour – especially when it is not at the expense of page-turning quality. And the pages do turn!

Cantwell has a gift for relating the quotidian, imbuing it with intrigue, and peopling it with characters who are steeped in ‘woo-woo’ – in this case empaths, and people and creatures from Hawaiian folklore. It is a compelling mixture, and keeps the little book skipping along at a great pace. The information imparted about Hawaii is fascinating – and everything drives the story forward.

If this sounds like your sort of book and you haven’t read the first two instalments, it will be a good idea to do so before embarking on this one. Although Cantwell does provide a ‘the story so far’ at the beginning of each why would you deny yourself the pleasure of the whole story?