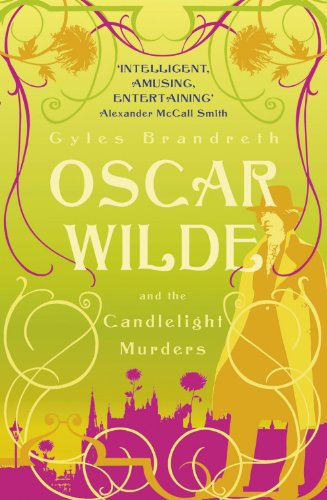 I’m a bit of an Oscar Wilder groupie, and enjoy Sherlock Holmes stories, so when I came across this mashup I decided to give it a whirl.

Brandreth is very knowledgeable about Oscar Wilde. He has written biographies about Wilde and his wider circle (and other well thought of biographies as well). So, factually speaking, he knows whereof he writes.

But how is he with plotting murder mysteries, I hear you ask.

The fun Brandreth had writing this first of an ongoing series (currently six) is evident throughout. The murder mystery does play second fiddle to Brandreth’s Wilde-isms as recorded by this book’s version of a Dr Watson, Robert Sherward.

Sherward was a real person, although what sort of relationship he actually had with Wilde we cannot know. There is nothing to suggest he was ever Wilde’s assistant in the way he is used in this book. Conan Doyle was, of course, also a real person. And he is embarking on his Sherlock Holmes series at the time this first book is set. He is basing Holmes on … you guessed it! His very clever friend Oscar Wilde.

I found it slightly irksome that Brandreth seems determined to attribute Wilde’s homosexuality (or perhaps dual sexuality) to a pure love of beauty, gender unspecified. He does actually use the quote about ‘the love that dare not speak its name’, the meaning of which I don’t believe is open to any other interpretation than ‘gay’ love (I use quote marks only because ‘gay’ in Victorian times was not used to mean homosexual). In order to lay down his own authorial words about the word ‘gay’ not being in vogue in Victorian society, and to look ahead to Wilde’s final three years in Paris, Brandreth freely steps through the gauzey curtain of his fiction and speaks directly on the reader. This need to unsuspend disbelief (!?) I found rather heavyhanded.

Nevertheless if you, like me, enjoy Conan Doyle’s Holmes and Watson stories, and, like me, have a weakness for Oscar Wilde you will find much to enjoy in this novel and its sequels.

At the end Brandreth gives potted biographies of the main players in his novel (all of which were real people). He also gives one of himself. These I found very helpful. They show exactly where the story has come from, and why.