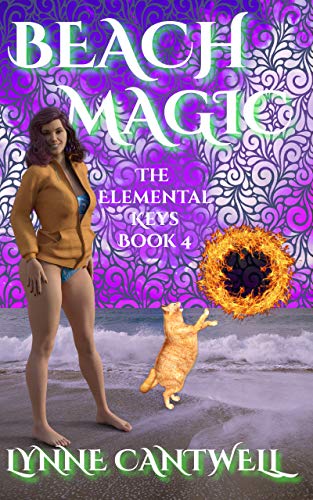 The first three books in this series were previously entitled Rivers Run, Treacherous Ground, and Molten Trail. They are now entitled River Magic, Bog Magic and Gecko Magic. And they have new covers that clearly match this one. It is under those latter titles that you should search for them.

Description: this is the fourth and concluding book of the author’s ‘Elemental Keys’ series. If the title and/or cover tempts you to think it might be a bit like Baywatch, let me assure you right away – this is nothing like Baywatch.

The scent of supernatural battles to come is heavy on the air as the book opens. Romance is also rife. The team of four half-Elementals tasked with saving the world have been bested in each of the previous three books. How will they fare this, last, time?

The cast of characters includes (but is not limited to) Elemental Beings, half-Elemental Beings, human beings, a demon, the Fae, golems, deities from the Hawaiian and Irish pantheons, a high council of Elemental Guardians, and a mind-speaking cat. Never a dull moment.

Appraisal: The half-Elementals – Gail, Raney, Collum and Rufus – are (finally) getting better at this saving-the-world schtick. Not before time. If you’ve read the first three novellas in this series you will know that they are searching for four vital keys. So far they’ve managed to lose three of them to a demon named Surgat, who has possessed Raney’s father. Raney didn’t like her dad much anyway, so it’s no great loss. But being outsmarted has taken a toll on the morale of all four of them at the beginning of Beach Magic.

Can they pull it all together when Surgat comes after the fourth Key? Yes they can. And in rather a surprising way. More is at stake than the faithful reader of the first three books might have imagined. People turn out not to be who they seem (except Surgat – he’s just a nasty demon, end of); instructions and, indeed, locations get turned on their heads.

Cantwell has come up with a most engaging conclusion to the story. I pride myself on guessing endings – and I was way off with this one. There is oodles of plot, many engaging characters, spectacle and battles galore, romance and witty repartee. Both uplifting (and we surely do need a bit of that just now in the real world) and satisfying in just the way one wants the final, climactic, book in a series to be. Recommended.

If you haven’t read the first three novellas, I urge you to do so before reading this one. This final book does stand alone. And Cantwell gives ‘the story so far’ at the beginning of each book in the series. However, reading them in order will be a much richer experience.

NB – I haven’t reposted my review of the third book in this series (was Molten Trail, now Gecko Magic) as I only posted it here a little earlier this year. I have retitled it to reflect the reissue.