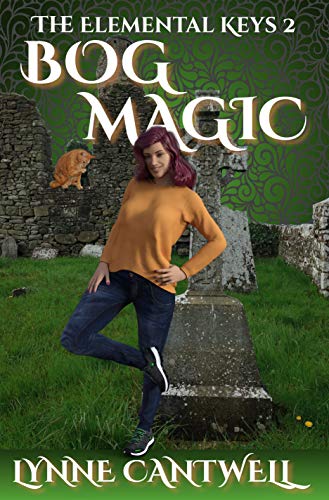 I am embarrassed to discover that I never posted this second part of ‘Elemental Keys’ to my blog last October, when it was called Treacherous Ground. Mea culpa! Now it has been retitled, recovered and reissued So here is the original review, with the new cover and title. (Confused? You have no idea! I have spent all afternoon on this.)

Description: This is the second novella in a tetralogy (The Elemental Keys), there being four elements, earth, air, fire and water. Raney Meadows is half undine (water nymph). In the first book (reissued as River Magic, previously Rivers Run: Elemental Keys Book 1), a series of super-coincidences brought her together with Earth, Air and Fire Elemental half-bloods. The four became a team to stop an ancient evil in the first book. Now they’ve come to Ireland to bring team member Collum Barth’s dead brother’s things home to his parents. But they’re also on the trail of Raney’s father, who tricked them out of an ancient key at the end of Book 1, and is now possessed by the ancient evil. The team needs to find what the key fits before Damien does. They believe it is in Ireland, close to Dublin and Collum’s parents’ home. The fae offer to help, but the fae charge a high price for assistance. Raney is keen to avoid her father as she knows that, even un-possessed, he has a passion for collecting of one-of-a-kind things, such as a unique, half-undine daughter.

Author: Our Lynne Cantwell (not to be confused with the Irish woman rugby international of the same name!) grew up on the shores of Lake Michigan and currently lives near Washington, DC. She is a prolific author of modern fantasy novels and novellas, usually with a warm romantic strand.

Cantwell worked as a broadcast journalist for many years. She has written for CNN, the late lamented Mutual/NBC Radio News, and a number of recherché radio and TV news outlets, including the now defunct wire service Zapnews.

Amongst her many qualifications, Cantwell includes a journalism degree from Indiana University, a master’s degree in fiction writing from Johns Hopkins University, and a paralegal certificate.

She is a contributing author at Indies Unlimited.

Appraisal: This novella works as a standalone, but you will quickly become aware that you are joining the story partway through.

The story relocates to Ireland early on, and we are given considerable information about Ireland in general and Dublin in particular. I once spent a week working in Dublin: a lovely city. Being a Celt by birth myself, I felt right at home there. I hope Cantwell did too.

As with all of Cantwell’s books, this one zips along. Something is constantly happening, problems are always being raised and solved, magic is being worked. In this case add to the mix a cat who mind-speaks with humans (if it likes you). The Elementals are still testing the extent of their powers as a quartet, which are still growing. They get better, as the book unfolds, at what they do. But they are up against powerful opposition. Collum, in particular, learns much about his gnomish gifts which are very useful to the Elementals.

And there is a warmth in the growing relationship between Raney and Collum to spice the book.

If you enjoy modern fantasy which splices together worldwide pantheons, myths and legends, then you will enjoy this book.