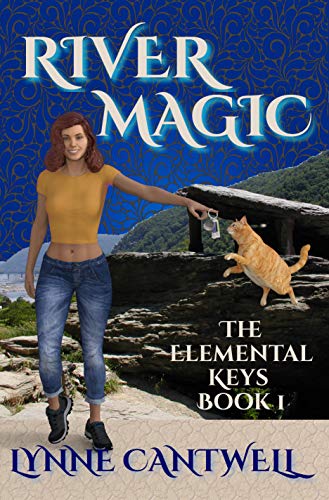 ‘River Magic’ was previously published as ‘Rivers Run’. It is Book 1 in the author’s Elemental Keys series and I reviewed it when it first came out.

Description: Raney Meadows is an actor in a long-running TV series. It has all become a bit much for her, so she takes a leave of absence to hike part of the Appalachian Trail and clear her mind. Unfortunately, on the Trail near Harper’s Ferry, she finds a body in the River Shenandoah. But the victim did not drown. How does she know this? She is half Undine – a water Elemental. The goddess Shenandoah exhorts her to cleanse the river waters of this violent death. The plot quickly thickens. Three more half-elementals make themselves known – earth, fire and air. That seems like a quorum … and, indeed, they have been brought together to prevent a great and ancient evil re-emerging.

Appraisal: I should nail my colours to the mast at the outset here – I love Cantwell’s work. I even love her romance, despite a lifelong aversion to any genre involving soppy kissing. Her Goldilocks writing style provides everything the reader needs to know and keeps the pages turning, turning, turning. It is her liberal use of what Cantwell refers to as ‘the woo-woo’ that sets her fiction apart and endears it to this reader. What is the woo-woo? A frisson of magic and spiritism that is always at the heart of Cantwell’s work. Sometimes – as with her ‘Pipe Woman Chronicles’ – there are whole pantheons of deities in play. Other times as with the standalone Seasons of the Fool and this first book in her ‘Elementals’ series, the fey aspects are essential but more lightly couched.

In this book we learn what it is to be part Undine; about Harper’s Ferry and the Appalachian Trail; the other Elementals are introduced and developed, and the first part of the plot is brought to a satisfying conclusion. However, much remains to be resolved as the series unfolds.

I know Cantwell originally put this out in a bit of a rush, and it did show (in my Kindle edition at least). However, then she lays down a sentence like this, “Her mournful rasp sounded like the barest trickle of moisture in a desert creek bed.” and minor imperfections are quite forgiven. Cantwell may have taken this republication opportunity of the series to tidy it up a bit. I haven’t checked.

* This review was originally prepared for Big Al’s Books & Pals. I received a complimentary e-copy *

NB – I haven’t reposted my review of the third book in this series (was Molten Trail, now Gecko Magic) as I only posted it here a little earlier this year. I have retitled it to reflect the reissue.