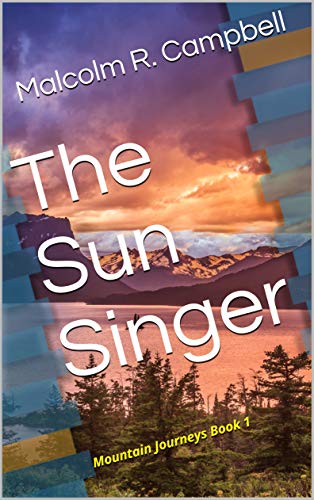 As a boy, Robert Adams is hit with the gift of prophesy. It’s all a bit of a lark, until he foresees the death of a school friend, which comes to pass the very next day. After that he buries his gift down deep – but he knows that it is only a matter of time before he will have to engage with it again. When he is fifteen he goes on a transformational trip to the mountains of Montana to honour a promise made to his grandfather (a soothsayer and Sun Singer himself). In the mountains Robert finds doors into the parallel world of Pyrrha. Suddenly it is clear what his gift is for. Now it is time to use it.

This is one of Campbell’s earlier books (first published 2010) and already his gifts for drawing warm characters and laying out a story so it flows towards and immerses the reader are well developed.

It is a satisfyingly complex tale. When the book opens, Robert Adams has denied his gift of prophesy. More about that gift, and the reasons he has buried it, come out in flashback. He and his family go on a trip to the Montana mountains much beloved by the author (he draws them beautifully: you can feel the love). Here Robert slips out of his own reality into Pyrrha, where a guerilla band is struggling against a powerful evil – standard fantasy fare. There is a deal of hiking through the same-but-different mountains involved. The mountain country becomes a character in its own right.

Robert’s world and Pyrrha bleed into each other in places. A few people are able to cross from one side to the other: Robert is one. There are others, some of them malicious. Robert becomes close to members of the guerilla band and tries to help them, at the same time finding out more about the gift he tried to disown. In the course of his physical and spiritual journey, the teenage boy grows up and becomes the Sun Singer.

There is a sequel to this book, Sarabande (2015) and also a prequel Mountain Song (2017). The trilogy will make most sense if you read them in order.

I reviewed this book for Big Al and Pals, in 2017, from a purchased copy of the book.

(I believe Campbell is offering this book free on Kindle 2 – 6 May, 2020. Whether that’s UK as well as US, you’d have to ask him. His blogsite is here: https://malcolmsroundtable.com/author/knightofswords/)

One thought on “Review: ‘The Sun Singer’ by Malcolm R Campbell”