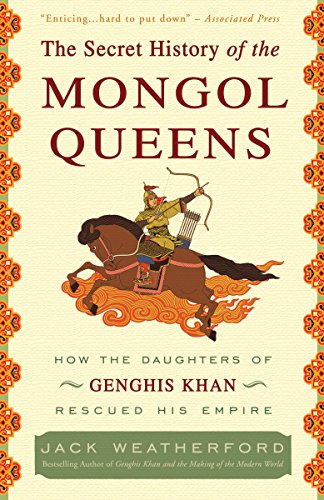 You have to persevere a bit with this. At the outset I thought the book was left-over research looking for a purpose, but it is not so. Weatherford’s first (very interesting) premise is that Genghis Khan married his daughters into various existing small khanates all over Mongolia (utilising the Mongolian custom of exogamy). As his empire grew he continued the practice over a lot of what is now China. The daughters were put in charge while the husbands were serving with Genghis Khan’s armies. Their administrative talents (learned from their dad) and the family connection meant not only that they administered ably, but also actively supported Genghis Khan and each other. After the great khan’s death his sons took to fighting among themselves, marginalising and murdering their sisters, and the empire collapsed.

Weatherford next looks into various other powerful women in the area, in the tradition of those early daughters of Genghis Khan. Finally he explores the life, rule and legacy of Manduhai Khatun – whom I had not come across before – but who proves to be a very clever woman indeed.

En passant he deals with how the later Mongol empire related to its neighbours and Europe.

He has had access to many more documents than the ‘Secret History of the Mongols’ (to which his title pays homage) and has chased his Mongolian queens through many primary sources. These sources become more plentiful as the centuries roll on, writing becomes more common and documents proliferate.

There is a good bibliography and serviceable index.