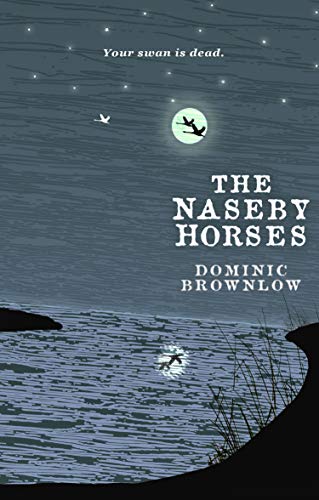 It is gratifying, as a reviewer, to be turned loose on a book in advance of publication and I hope I have provided accurate insights to help you decide whether this is your sort of story. If the publisher makes Kindle samples available at the outset, I believe sampling the opening event will have you as hooked into this unusual book as I was.

The Naseby Horses is a novel of fluidity. It is set in the Fens, except when it wanders back to old haunts in London. It is set in the stupefying heat of August, except when suddenly the room is cold. Time is the most fluid thing of all (the novel begins on Day Three). Truth is also fluid. And the reader has a mounting sense that everybody is being economical with it.

To say that the narrator is unreliable is to understate. He, Simon, suffers with grand mal fits and the book begins with him coming home from hospital after the worst one yet. There is something of the autistic spectrum about Simon too – he is a meticulous observer and has excellent – if not perfect – recall. Because of his condition and his medication his grip on ‘now’ is often tenuous. His mind, like a butterfly, sometimes doesn’t seem able to distinguish between current events and the many places in the past upon which it alights.

Simon is a twin, and it is not giving away anything that the reader doesn’t learn early doors to say that his last fit coincides with the disappearance of his twin sister, Charlotte. They are twin-close, as if having shared a womb they cannot help but share their lives outside it. Simon wants only to protect her, to follow her, to find her – wherever it is she is lost.

The family has just moved from London to deepest Norfolk, albeit to a village they know well. Charlotte has been vocal that she doesn’t want to leave London. And there is certainly a feeling of Stepford about the village of Glennfield – and not just the wives. There are few other teenagers living there. The twins are thrown upon their own resources a lot of the time while the adults in the mix have their own problems to sort out.

Into the fluid mixture of time and place is added a mystery from the time of Cromwell and the Battle of Naseby. Simons acquires information about this mystery like he does everything else – like a sponge. It quickly begins to trickle through the book like a poison. Is everything connected? Or is, actually, nothing connected except in the mind of an overwhelmed teenager suffering from severe epilepsy?

The authorial voice which drives the story forward is knowledgeable. One felt throughout that none of the characters was telling much of the truth most of the time, but one felt the controlling hand and meticulous research of the author throughout in the way that the historical story, the sense of place, and Simon’s epilepsy are woven through the work.

One thought on “Review: ‘The Naseby Horses’ by Dominic Brownlow”