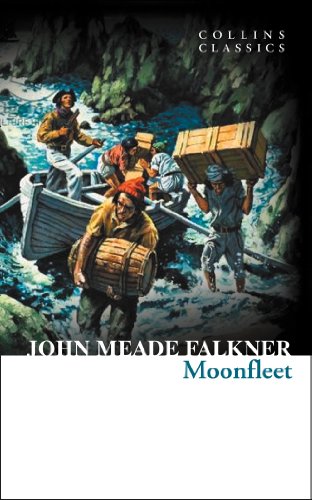 When I moved to Weymouth in 2016 I quickly discovered that the magnificent natural geography of Chesil Beach, the Fleet and Portland are the settings for this book. I had known of it as a youngster. But I’m not sure I ever read it. So I invested in an inexpensive copy and it has been my bedtime reading when nothing more pressing lurks on the bedside table.

This book was first published in 1898. It is a tale of derring do, much in the style of Treasure Island or Huckleberry Finn. John Trenchard is the story teller. For the style of the book – like the other two I mention – for this is a story told, pure and simple. There is none of the modern ‘show don’t tell’ which we expect from modern fiction. Indeed, I had forgotten how powerful a strong tale plainly told can be.

John Trenchard is a miserable child; living with a dour aunt, in love with a girl far above his station. But he is stout hearted and makes the best of it. He is glad to find a friend in Elsevir Block, who runs the local pub (which has the best name I think I’ve ever come across, which I will leave you to discover) and with whom he eventually goes to live. They quickly form a lifelong bond. Elsevir’s heart is in the right place, but he is a rough sort – a ‘Lander’ by night as well as a publican by day

The lad finds Elsevir’s work with the smugglers enticing. Through them he learns of a treasure, which he desires so as to improve his lot and perhaps even rise high enough in status to marry his girl. In pursuit of this treasure the John and Elsevir experience adventures with the Revenue men, hardships, escape from danger, more hardships, folly, cupidity, and death before they return to Moonfleet ten years later, when John has become as a man.

The descriptions of the countryside and, even more so, of the sea and sailing upon it, are just marvellous. The action is of the page-turning variety. I have several times read on into the wee small hours with this one.

Be advised that the Collins Classic Kindle edition I used is 75% book and 25% some sort of vocabulary of outmoded words which don’t seem to have any connection with the words in the book. How this jives with the 272 pp estimated by The Zon I cannot tell you. Suffice it to say that the end is considerably more nigh than you might think.

This is essential reading for anyone living in Dorset, especially by the sea.